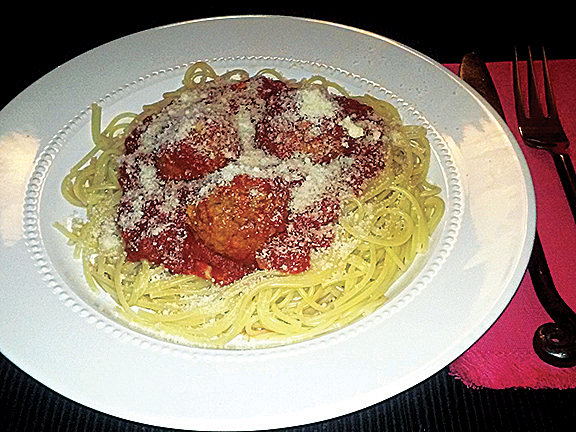 In an effort to introduce the residents of Alexandria to Rick's Group, Deanna Monroe throws a welcoming party at her home. Everyone attends with the exception of Daryl, who seems unwilling to even take a shower in order to acclimate into their new home.

He does make his best attempt but ends up accepting an invitation to eat dinner with Aaron and Eric instead; after being lured by the promise of "pretty serious spaghetti."

After they eat, Aaron presents Daryl with the parts to build his own bike. And asks that Daryl join him on scouting missions to recruit new people to live in Alexandria. Daryl's ability to judge character will be an asset, according to Aaron. Eager to escape the confines of the community, Daryl agrees. He's found a new respect for both men.

The lack of fresh meat could not affect Aaron's ability to make a delicious and hearty meatballs. Properly seasoned to accompany the spaghetti, TVP (texturized vegetable protein) makes and excellent substitute for ground beef and enriches the already rich tasting homemade spaghetti sauce. Even Daryl would approve.

And when the dead rise; don't tell Carol's secrets to anyone. Or you'll end up tied to a tree. 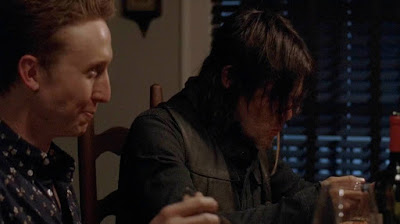 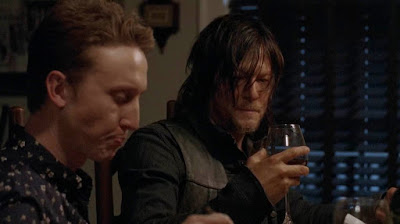 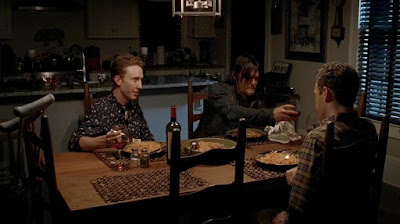 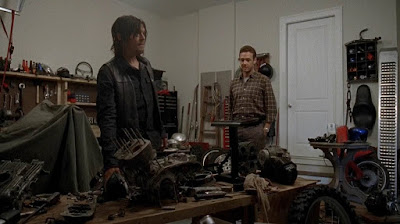 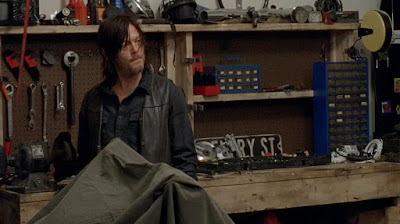 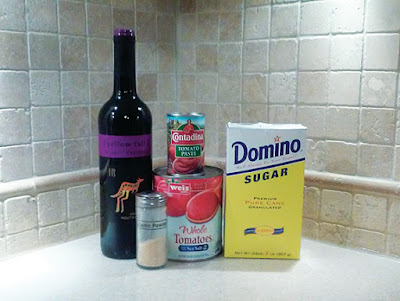 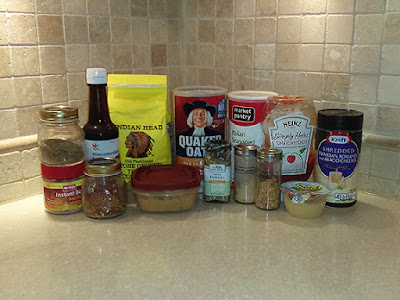 In a large stockpot, combine whole tomatoes, tomato paste, garlic powder, sugar and wine. Using a potato masher, gently mash the whole tomatoes until they are well crushed and combined into the liquid. Turn on medium-low heat and allow sauce to come to a boil. Turn down heat to low and allow to simmer for 15 minutes, stirring several times.


In a large bowl, combine hot water, applesauce and cornstarch. Stir well until there are no lumps of cornstarch. Add the next ten ingredients (all seasonings and flavorings) and stir until blended. Then stir in TVP and mix well. Allow to sit for a 5-10 minutes so TVP can absorb liquid.

Next, stir in cornmeal, bread crumbs and oatmeal until well blended. Preheat oven to 375°F while the mixture rests for 15 minutes.

Spray a baking sheet with non-stick cooking spray or coat with olive oil. Shape TVP mixture into meatballs that are approximately the size of walnuts. Place on baking sheet, spaced evenly apart. Brush very gently with olive oil or spray with more non-stick cooking spray. Bake for approximately 20 minutes, or until meatballs are slightly firm when pressed and appear to be dried.

Remove from oven and gently stir into hot marinara sauce, just to coat them. Do not allow meatballs to simmer in sauce. TVP is not as tough as ground beef and the meatballs can crumble apart if allowed to simmer in liquids.

Serve with the size spaghetti that your Group prefers (cooked in salted water, according to package directions) and be sure to pass the Parmesan Cheese for sprinkling. Open a bottle of wine and enjoy. Oh, and use your napkin…not your sleeve.